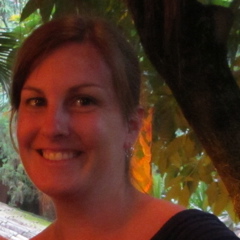 Jennifer began her studies as a Flute Performance/Music Industry major. She currently works for the U.S. State Department, and is posted in Rio de Janeiro. Here’s her story.

I went to a very small high school where the fact that I pursued music at all made me pretty much the most musical person in school.  My teachers all convinced me that I had to major in music in college and that I should become a music teacher.  No one ever introduced me to other options so, without any real guidance, I decided on music education.

When I entered college I soon realized that there were many more careers in music than teaching and I still wasn’t sure I was really cut out to be a music teacher.  Syracuse University had a good music industry program and I decided that major would give me the most options so I changed to it.  The only problem was that the program focused mostly on popular music management so even though I really enjoyed the coursework, it still didn’t quite fit.

I interned at the Royal Philharmonic Orchestra during my semester abroad in London.  This was the first time that I learned about the existence of education programs in arts organizations.  I really enjoyed working with these types of programs and decided to pursue education again and would look into graduate schools when I got home.

I thought I wanted a masters degree in music education (as I still hadn’t learned about arts administration programs).  I’m really thankful for my friend Andy, who was a graduate student at Syracuse, for knowing what I needed and setting me up for it before I knew myself.  He encouraged me to go to Florida State University because he went there and they had a great music education program.  He also arranged for me to get an assistantship in the Arts Administration program office where I would get to do things like manage the summer music camps and get to know the Arts Adminstration staff and students.  As he expected, I realized that was where I belonged and switched my major to Arts Administration. That decision really set me on the path that, though winding, led me to my career with the State Department.

After graduate school, I moved to Washington, DC for an internship with the National Symphony Orchestra at the Kennedy Center.  This was a great introduction to the practical world of arts management.  The Kennedy Center is an interesting organization because it is so large and in some ways has an incredible amount of resources while individual departments still have very small staffs and you have to be creative to get things done.  I liked this grass roots aspect under the umbrella of a large organization.

After that, I decided to stay in Washington, DC and began looking for a job.  This did not turn out to be as easy as I thought!  After a lot of searching, I accepted a position in the Artistic department at Washington Opera.  Although I would never admit it at the time, I had never seen an opera before and had no idea what an Artistic department does!  I quickly learned about auditions, casting, and contracts and soon fell in love with opera.  A year later I was managing the Domingo-Cafritz Young Artist Program where I was responsible for the daily training and rehearsal schedules, production, budgeting, and planning.  Even though I was not a singer, I learned everything I could from my opera colleagues and relied on advice from those more expert than me every day.  This taught me that you do not have to stay in your comfort zone.  What you know can apply to a lot of different things.

Although I would not trade my six years at the Opera for anything, I never felt that the arts were the only thing for me, the way many of my colleagues did.  I knew I needed to do other things in my life and there were aspects of arts management that were starting to negatively affect my life.  I was working for very low pay, which added stress to my life, and I was working very long hours, rarely getting even a day off on the weekend.  This takes a toll after a while.  I wasn’t sure my music background really qualified me for much else so I went back to school part-time to get my MBA.

Studying business at the University of Maryland was a great opportunity to meet people who had a wide variety of careers.  I learned about things like finance and business strategy and found a world of new opportunities.  In the end, I landed a position in supply chain at Black and Decker.  I was thrilled to work for a large corporation that I expected would offer many more opportunities to learn, try new things, and travel.  Unfortunately, my timing was a bit off.  I entered my job in 2007, just as the economy was taking a downturn, and suddenly I was faced with the same pay cuts, layoffs, and lack of mobility that I faced in the arts.  At the same time, I realized that the culture of the organization is just as important as the work and I did not fit into this culture.

So, where did you fit in?

I had always had in my mind that I would like to join the Foreign Service with the Department of State.  I loved the idea of travel, learning languages, living abroad, and working in international affairs.  So in 2009 I took a shot and was fortunately hired!  Since then things have fallen into place so well that I know this was exactly the right decision for me.

I now work as a diplomat with the U.S. Department of State.  I am currently posted to Rio de Janeiro where I work in the consular section, processing visas and working to help American citizens abroad.   In my first year, I have had amazing opportunities including being interviewed for national TV news (in Portuguese!) and organizing the motorcade for President Obama’s visit.  My future jobs could focus on a variety of areas including operations, reporting to Washington about issues in that country, or public affairs.  Next year I will move to Seoul, Korea.

The thing I love most about my job is the people.  I am surrounded by interesting people from all different backgrounds who are all very happy to be here.  This does an enormous amount for morale.  Because we all came from different backgrounds, there is no assumption that one person is more qualified to be here than someone else.  So we are all given a lot of responsibility and trusted to make good decisions.  The work is never boring – embassies and consulates are involved in so many areas that something new and exciting is always coming up.  Finally, I am confident that that I have a career path ahead of me.  This is the first time I have ever been in a place where I know I will not have to send out resumes every year to find the next opportunity.

The unforeseen positive was that giving up performing allowed me to redefine myself.  I had always defined myself as a musician and I clung to that for a long time but now I could allow myself to be defined as more than only that.

When I was at the opera, I always felt the need to define myself as a former musician in order to justify why I would be qualified to work in Artistic or the Young Artist Program.  When I moved to the business world, people tended to see music as irrelevant to my work so I started to say that I came from the non-profit world, rather than the arts.  The Foreign Service is, by nature, made up of people who come from all different backgrounds.  Diversity is embraced so I have no qualms about saying I came from the arts and studied music.  At this point, I have not performed in a very long time so I do not define myself as a musician anymore.

Personally, I see it more as a path that a destination.

I don’t want to define myself as a musician, or arts administrator, or business person.  I like the idea of doing lots of different things and being less defined by my job, although it is very fun to write “diplomat” on my tax return.

Toolkit: what skills carried through to your current position?

Music training is great for all professions.  It taught me discipline, creativity, and commitment.  Arts Administration taught me resourcefulness and flexibility.  You are always being asked to do things you have never done before and you just have to figure it out.  The standards that I was held to (or held myself to) at the Opera were far greater than anything that was expected of me or my colleagues in my for-profit position.   Working in the corporate world, I was really surprised at how much stronger my work ethic was that that of many of my colleagues.  Working in the arts, we are used to putting in as many hours as it takes and sticking to deadlines- once you announce the date of the performance, that is the date.  The Department of State actually has a lot in common with the arts.  Although the Department itself is huge, I work for a small consulate with limited staff and budget and we are always trying to creatively accomplish more than we realistically have the resources to do.  Every day I draw on the foundation I built during my time in the arts.

Even if you are convinced that you will always have a career in the arts, learn about more than just music.  You don’t know where life will take you.  When I explain my varied career path, most people think it makes no sense but to me, I know I needed to take each one of those steps to become who I am now and get to where I am.  I do regret closing my mind to things non-music when I was younger.  I should have learned more about other disciplines and maybe studied a language.  By the time I realized how important that was, I had a lot of catching up to do.

You can only consider the options you know exist.  Talk to lots of other people – performers, former performers, non-musicians – and find out what they do and why they like it. Most importantly, no decision has to be final.  You can always change directions later.  But don’t turn down opportunities to learn something new because you think it is not relevant now, it may be later and in the end, everything relates to everything.