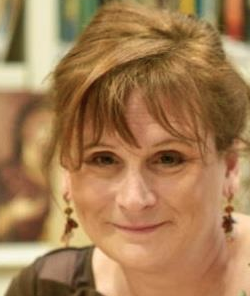 Kim Pensinger Witman is known nationally for being the driving force behind the Wolf Trap Opera Company, one of the premiere young artist training programs in the U.S. But prior to her operatic life she studied in two different, yet ultimately related, disciplines. Here’s her story.

My transitions weren’t clean, and they were of two types – the first early one, from music therapy to the life of a freelance collaborative pianist; and the second one, from pianist to administrator.

Where did you go to school?

What drew you to your chosen degree field?

I identified as a musician from an early age – was active in every single musical thing possible in my childhood, from school choirs and bands to being an organist at my church at age 13. But I had no illusions about my ability to be a professional musician. I didn’t believe I had the chops or the work ethic to sustain all of that private practice time. In looking for a career that might allow me to stay in touch with music and still let me be with other people, I found music therapy. My music therapy professors were wonderful role models, and they reinforced my decision to embrace what was then a particularly new and kind of fringey career path in music. My piano teacher in my undergrad was also a composer, and although he wasn’t an R.M.T., he was heavily involved with the music therapy track at Elizabethtown.

In the early years of our marriage, my husband and I decided we wanted to get M.M. degrees. Just because. We figured we’d have kids fairly soon, and after that, such a pursuit would be unlikely. I really just wanted to immerse myself in the keyboard in a way I hadn’t before – and at 25, I was finally ready to do it. But I didn’t believe it would lead to a career change – I fully expected to continue as a therapist after getting the degree.

During my M.M. degree, I fell into a graduate assistantship in the opera program. (I filled an unexpected vacancy. I only got the job because the program was desperate, and I had a bag of tricks that allowed me to be functional – awesome sight-reading, a love for languages, and the ability to work easily with a range of people.) The decision to move away from therapy into playing the piano for a living was born of curiosity after I finished my degree. I really didn’t know if I had the chops for it but thought I would spend a few years in pursuit and see what happened. So, the first step into my collaborative pianist career was made for me; had the graduate assistantship not opened up unexpectedly, I would not be doing what I’m doing today. Full stop. But the next step – that of independently filling in the gaps in my opera education in the 2 years after my M.M. degree – was a decision I made on my own.

Even though I learned a tremendous amount at Catholic University, it didn’t have a lot to do with my transition to the opera business. Because I was so ill-prepared for my surprise teaching assistantship, I scrambled to stay one step ahead of my students and wasn’t really able to benefit from high level instruction of my own. The biggest influence at CUA was probably my piano teacher Thomas Mastroianni and my chamber music supervisor Robert Newkirk. Dr. Mastroianni saw me through a scary wrist/hand dysfunction (thought to be RSI but ultimately wasn’t) and gave me the confidence to know that if I wanted to make my living at the keyboard, I probably could. And Bob Newkirk presided over my first legit piano trio experiences, cementing a future love of chamber music.

I know lots of people who would agree that any kind of psychology degree is a boon in the performing arts. 🙂 But how did you make that jump from the piano bench to administration?

When my current job opened up in 1997, I was a pianist on staff at Wolf Trap. I didn’t intend to move to an administrative career (was not looking), but over a period of months I fell into it. (I seem to do a lot of falling into things…) The move into administration was a decision I made somewhat reluctantly. When my job opened up, I made no move to pursue it, for I couldn’t imagine taking a desk job. But when it wasn’t immediately filled, I began to think that such a move would allow me to continue to participate in the opera world, open up new creative possibilities, and (probably most importantly) let me move away from the musician schedule into a 9-5 routine during much of the school year so that I could see my kids more. Spending as much time as possible with my family was non-negotiable.

So here I am – currently the Director of Wolf Trap Opera & Classical Programming for the Wolf Trap Foundation for the Performing Arts. Basically, I run an opera company inside a non-opera-specific organization.

How do you self-define?

Then: I’m an accompanist. (Well, a collaborative pianist, but such a thing didn’t really exist then.)

And simultaneously with all of the above; I’m a musician. (Which has less to do with how I pay my mortgage than how I see the world.)

Ok, speak to us a little bit about that worldview.

This can’t be understated. Everything I learned about people, about the intersection of art and life, had its roots in my study and brief practice of music therapy. I went into that specific field because the abstract study of music felt somehow isolated and irrelevant, and I was only interested in spending a life in music that felt as if it enabled connection with “real life.” (A naïve statement in its frankness, but it was how I felt at the time.) Even now, two career shifts later, my whole approach to the people in this business – the artists, the patrons, the audience – is shaped by those early years of never considering art as being outside of daily life.

And everything I learned and did as a collaborative pianist continues to play into my life as an administrator. It taught me empathy for performers, a respect for the dynamic and nonlinear processes in the rehearsal room, and an appreciation for the high levels of research and preparation it takes to do good work.

What advice would you give to someone struggling with this decision?

Lest any of this seem too tidy, I should mention that while I was a music therapist I was supplementing my income by playing in piano bars and gigging as accompanist for choral societies and theatre groups. While I was a collaborative pianist, I was a church organist/choir director, piano teacher, pit orchestra member, dinner theatre music director, college adjunct faculty and mom. Some of that stuff followed me into my arts admin days but gradually fell by the wayside as the demands of my job increased and my stamina gave out. So be aware that some of the clarity comes with the retelling…

Aside from the obvious (know yourself, be true to yourself, don’t do any of this to please other people), I guess I’d have to caution against black-and-white thinking. This is all so very and so wonderfully gray that it need not be as frightening as you think. I’ve always been terrible at the 5-year/10-year plan thing because it seems so much more legitimate to focus on today’s decisions, next week’s goals, or (at the outside) next season’s dreams. You may be the kind of person who needs to project beyond that in order to move forward. But I believe that it hamstrings us unnecessarily to frame our decisions as part of a linear path in such an extended time horizon.

And this is not always bad.

Be flexible, keep your gaze forward but your feet underneath you, and you’ll know what feels right. And generally, those unexpected things are way better than anything you planned.

And now that I think of it, probably the most important thing is to ignore the voices in your head (or the people outside of it…) who tell you that if you have X years or X thousands of dollars investment in training for a specific career, you have a moral obligation to see it through. If you know it’s not the right path at any point, that’s the time to set a new course. And although the next year or two of transition may be difficult, it’s nothing compared to the desperation you’ll feel if you keep blindly putting one foot in front of the other and end up in a life you hate.

Furthermore, none of what you learned is lost. Seriously. No matter how specific those skills, the only way they’ll go untapped is if you don’t value them.