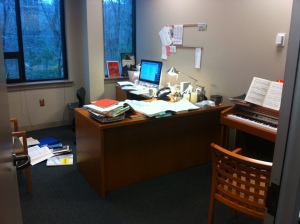 I’m new to Austin Kleon. (Late to the dance, but I’m still having a pretty good time thanks to his words and visuals!) He’s written two books (the newest is just out), been interviewed and reviewed, and lectures (for Ted! And SXSW!) about creativity and the web.

I stumbled across him on my twitter feed – caught the hashtag #steallikeanartist.

But then I clicked through to this: On Keeping or Not Keeping Your Day Job.

It’s a polarizing thought, for sure. Do I throw myself headfirst into a new career, starting at ground zero, with little more than desire and enthusiasm (and the internet, naturally) to help me through? Do I toil (word choice for dramatic effect) forty hours + a week at a day job, slowing my progress (and starving my soul, perhaps), to only spend a little time on my passion?

It’s a tough question in particular for performers, who have a large physical component to their chosen profession. Without so many healthy hours in the ol’ woodshed, you can’t routine those skills that are needed to survive rehearsal, let alone a string of performances. I would liken it perhaps to an athlete: if you’re in training, you’re in training and you’re devoting all of your time to your craft.

But, to play the devil’s advocate a bit: if you had a day job that was rewarding/complementary to your performing goals, and had to worry less about making ends meet, would that make you feel freer? Or would the simple act of splitting your attention make you feel more constricted?

Its fair to say that it depends on the individual. I’ve worked with a writer who is brilliant – he could very likely make a living simply with the sort of writing he does. But he has a day job in a complimentary industry. In this industry job, the gigs are shorter and higher pressure; there’s a lot of social interaction (he works from a centralized office rather than at home); and he’s trying to encapsulate someone else’s vision. By contrast, when he works on his own writing, it’s from a place of creative oversight, and he does much of it in isolation.

The two jobs cross-pollinate one another.

As a dramatic tribe (I for one likely wouldn’t have picked performing if I hadn’t been so strongly drawn to its inherently dramatic aspects), I think we tend to be an all-or-nothing tribe. We throw ourselves in, hoping to sink or swim, and become confused when the choices aren’t that clear.

I wonder if we’d be better served trying to have our cake and eat it, even if just for a little while?

My favorite quote from Austin’s entry is:

Remember: All advice is autobiographical. YMMV: Your mileage may vary. Feel free to break the rules. Make the life you want.