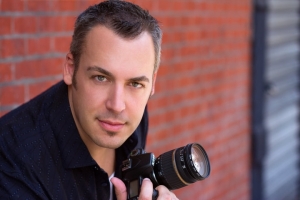 Mark is a professional photographer, specializing in portraiture, and more specifically headshots. (Those pictures that professional singers use as part of their calling card.) Here’s how he found his path:

Where did you go to school? (Please include program of study, and degree awarded)

I studied music education (vocal certification) at the Crane School of Music, part of the State University of New York at Potsdam. I earned a Master of  Music degree from Carnegie Mellon in Pittsburgh in vocal performance.

What drew you to your chosen field?

My high school music teacher, Diane Abrahamian MacNally was an amazing human being. I was just floating around school – there wasn’t anything special about me, nothing I did really made me stand out. I auditioned for the school musical because there was a girl that I had a crush on, and because any guy that auditioned was guaranteed to get in. One day I was goofing around and really sang out – and caught the teacher’s ear. She  jumped on my potential, and I trusted her enough to do anything she asked. I always wanted to give back, to do for another student what she had done for me.

I got a degree in music education with a vocal performance focus from SUNY Potsdam, and while I felt I learned my craft, I felt like I was unprepared to teach. I wanted to perform, and so I applied for grad degrees at NEC, Curtis and CMU; I wanted the opportunity to study both operatic and musical theater literature.

After graduation from CMU, for several years I made the majority of my living as a singing actor. Sure, I took some supplemental jobs (hotels, restaurants, catering), but I was doing tours South Pacific, Beauty and the Beast, regional theater & off-Broadway shows. But the closer I got to Broadway work, the more elusive it became…and the harder it got when the in-room confirmations didn’t materialize into contracts (Or worse, when the contracts dissolved.)

In October of 2004, I had a turning point. I had a small operation, and planned to take the following holidays off, intending to re-evaluate the whole career thing after the first of the year. But something went wrong with the operation, and I was in the hospital for 5 days with collapsed lungs – resulting in 50% of their original capacity. I felt like my decision was made for me.

I had a gig that I had been hired for before the surgery that I was committed to – a production of The Fantasticks in North Carolina. I struggled – the breath that was so fundamental to my technique, to my ease onstage was gone. I made it through the production, but realized that I couldn’t do it anymore, nor did I feel the same desire and drive I once had.

So, what did you do next?

A friend in Charlotte asked me to help decorate her beautiful 100 year old home. I had done similar projects for friends and family, but she finally said “You’re so good at it, and so happy doing it, why don’t you do it?” I couldn’t think of a good reason not to.

I went to work at Marshall Watson Interiors, a design firm on Manhattan’s Upper West Side. It was a small firm specializing in residential design. I remember applying: I had no formal training in design, but had a little portfolio of the work I had done for the people I knew, and a friend got me an interview. I got the job and worked there for almost three years. After living a freelance performer’s life, the predictability of the schedule was wonderful! I had a full-time job, a place to go every day, something to do. I didn’t have to be self-motivated. And, most importantly, I felt really needed. There were always so many people clamoring for singing gigs that they never felt secure: I knew that there was always someone waiting for the opportunity, who would kill to be in my shoes.

While the schedule and the work were both really gratifying for a while, both the predictability and eventually the lack of autonomy started to wear on me after a while. When I started feeling really frustrated, I began taking photography classes. I found it really gratifying, and spent a year doing it as a creative outlet before deciding to make it my vocation, rather than an avocation.  I’m currently a headshot photographer, working with people who are, in many ways, in my old shoes. I love shooting performers (with a camera, obviously!) My education background and work as a vocal coach helps me to see the best in people; it was always one of my strengths, and I can capture those positive aspects of them on “film”, as representations of their best selves. And my experience in the business comes in handy: I know what’s expected and how best to portray them.

The freelance schedule really fits me better than the traditional office schedule did: I needed the structure for a while, but I truly love project-based employment. And I love being my own boss! I’m confident with money, so that helps – my dad gave me a good foundation, both in finance and in being handy – and I rely on all of those skills as the owner of my own business.

The thing that I miss the most from performing was the family atmosphere: being in a cast, a group of people with lots of commonality. There was an instant connection on a deep level. And those rare moments when I was onstage, really creating and connecting with the audience – I miss those, too. But I get some of those moments back in shooting, in creating those strong, and very quick, connections to people help me to parse out how to show them in their best light. I get positive feedback, rather than the cold “thank you” of the audition room. And I get to be creative on a daily basis. But mostly, I feel that I’m doing something worthwhile: by staging a comfortable, relaxed shoot, having a good time, and then seeing my clients so pleased with the end result solidifies that my choices are worthwhile, and what I do has value.

Any advice or parting shots?

I don’t regret studying music: it’s made me uniquely suited for the professional niche in which I find myself. I count myself lucky to have been successful in three very different creative career paths, and to know that I can carry forward all three in some manner throughout my life. Nothing’s off the table.